Fencing is a group of three related combat sports. The three disciplines in modern fencing are the foil, the épée, and the sabre (also saber); winning points are made through the weapon’s contact with an opponent. A fourth discipline, singlestick, appeared in the 1904 Olympics but was dropped after that, and is not a part of modern fencing. Fencing was one of the first sports to be played in the Olympics. Based on the traditional skills of swordsmanship, the modern sport arose at the end of the 19th century, with the Italian school having modified the historical European martial art of classical fencing, and the French school later refining the Italian system. There are three forms of modern fencing, each of which uses a different kind of weapon and has different rules; thus, the sport itself is divided into three competitive scenes: foil, épée, and sabre. Most competitive fencers choose to specialize in one weapon only.

Competitive fencing is one of the five activities which have been featured in every modern Olympic Games, the other four being athletics, cycling, swimming, and gymnastics.

The foil is a light thrusting weapon with a maximum weight of 500 grams. The foil targets the torso, but not the arms or legs. The foil has a small circular hand guard that serves to protect the hand from direct stabs. As the hand is not a valid target in foil, this is primarily for safety. Touches are scored only with the tip; hits with the side of the blade do not register on the electronic scoring apparatus (and do not halt the action). Touches that land outside the target area (called an off-target touch and signaled by a distinct color on the scoring apparatus) stop the action but are not scored. Only a single touch can be awarded to either fencer at the end of a phrase. If both fencers land touches within a close enough interval of milliseconds to register two lights on the machine, the referee uses the rules of “right of way” to determine which fencer is awarded the touch, or if an off-target hit has priority over a valid hit, in which case no touch is awarded. If the referee is unable to determine which fencer has right of way, no touch is awarded.

The épée is a thrusting weapon like the foil, but heavier, with a maximum total weight of 775 grams. In épée, the entire body is a valid target. The hand guard on the épée is a large circle that extends towards the pommel, effectively covering the hand, which is a valid target in épée. Like foil, all hits must be with the tip and not the sides of the blade. Hits with the side of the blade do not register on the electronic scoring apparatus (and do not halt the action). As the entire body is legal target, there is no concept of an off-target touch, except if the fencer accidentally strikes the floor, setting off the light and tone on the scoring apparatus. Unlike foil and sabre, épée does not use “right of way”, and awards simultaneous touches to both fencers. However, if the score is tied in a match at the last point and a double touch is scored, the point is null and void.

The sabre is a light cutting and thrusting weapon that targets the entire body above the waist, except the weapon hand. Sabre is the newest weapon to be used. Like the foil, the maximum legal weight of a sabre is 500 grams. The hand guard on the sabre extends from hilt to the point at which the blade connects to the pommel. This guard is generally turned outwards during sport to protect the sword arm from touches. Hits with the entire blade or point are valid. As in foil, touches that land outside the target area are not scored. However, unlike foil, these off-target touches do not stop the action, and the fencing continues. In the case of both fencers landing a scoring touch, the referee determines which fencer receives the point for the action, again using “right of way”.

Four Seasons offers recreational and competitive level fencing programs. Competition levels include local, divisional and national. It is an add-on athletic program open to all members ages 10& up for a $10.00 monthly fee. Youth and adult participation is encouraged with all equipment and instruction included. Fencing builds coordination, upper and lower body strength, self-confidence, and sportsmanship through competition.

Sign up today for beginning fencing classes as class size is limited – preregistration is required. For more information please call Doug Jauer at 712-266-3074. 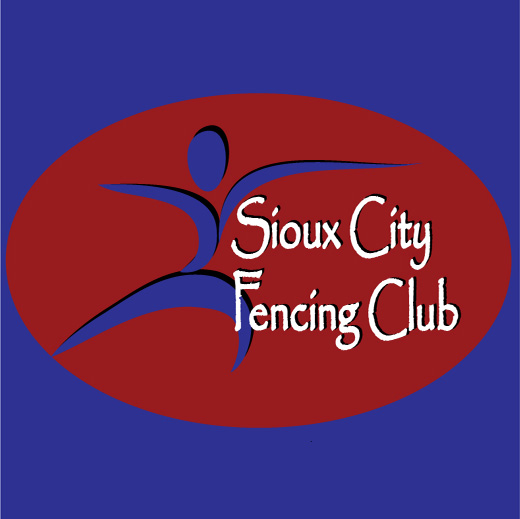 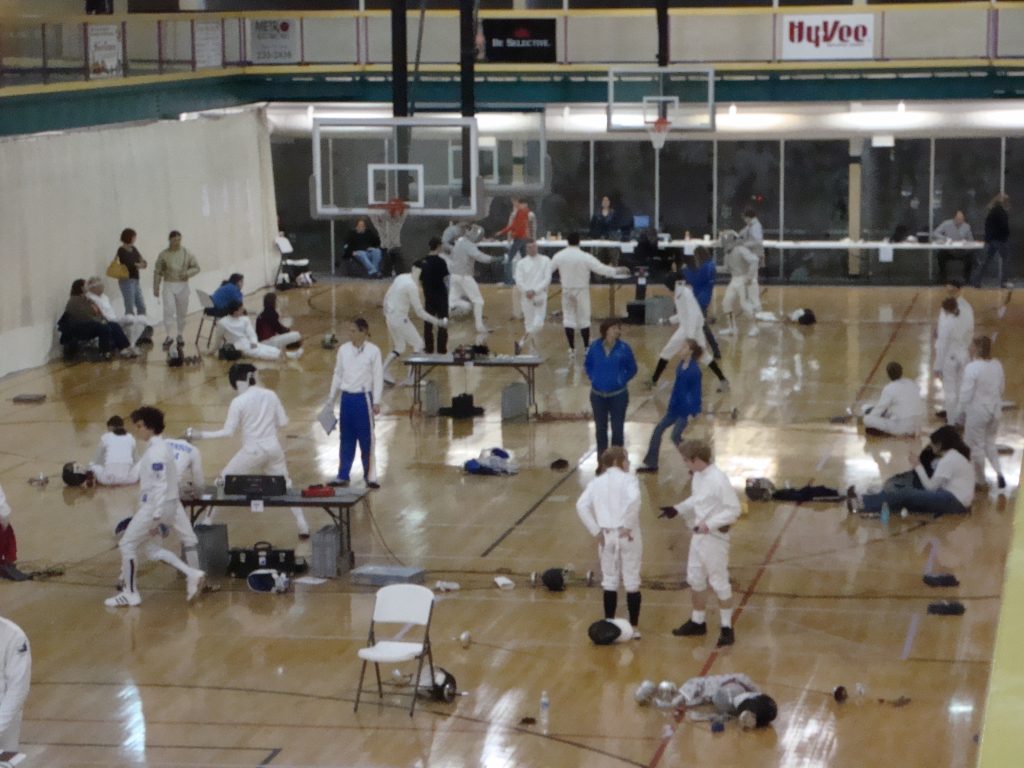 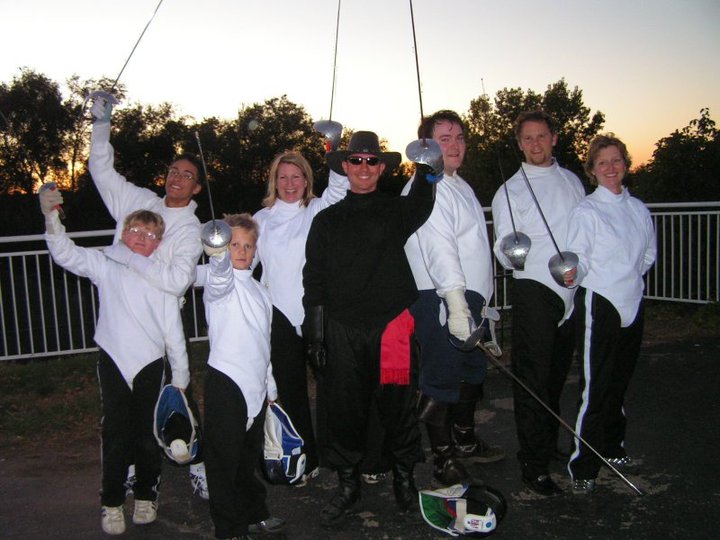 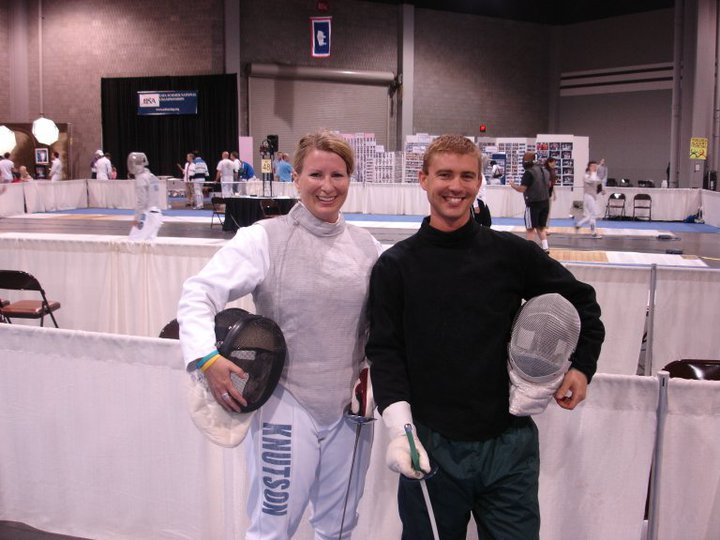 Give your child the tools they need to succeed in life!

Tae Kwon Do is a Korean martial art and the national sport of South Korea. It is also regarded as one of the world’s most popular martial art in terms of number of practitioners. In Korean, tae means “foot”; kwon means “fist”; and do means “way”; so tae kwon do is loosely translate as “the way of the foot and fist”. Tae Kwon Do is known for its emphasis on kicking techniques, which distinguishes it from other martial arts such as karate or kung fu. Tae Kwon Do as a sport and exercise is popular with people of both sexes and of many ages. Physically, Tae Kwon Do develops strength, speed, balance, flexibility, and stamina.

Taekwondo Teaches the vital skills it takes to be a leader in the classroom and in the world. In the first six weeks of training you will not only see marked improvement in balance and fitness, but you will see how we teach goal setting, self-discipline, respect, and perseverance.

Our Mission
We want our students to achieve the absolute best, not just in taekwondo, but also in their everyday lives. It is important to us that they develop the skills to be productive, successful individuals. An integral part of our program is to teach the students the importance of focus, respect, and self-discipline.

Certified Instructors with over 35 years of experience!

How much are classes?

We do not like to put a value on our program in terms of the money, but more on the “Return on Investment”. We do have several membership options that we are willing to discuss depending on your specific needs.

No, we do not require anyone to sign long term contracts like a lot of other schools do.

Do I have to be a Four Seasons Member?

No, you do not need to be a member of Four Seasons to participate in the taekwondo program.

Do you offer a discount for additional family members?

Yes, we offer great discounts for families with more than one child and PARENTS ALWAYS TRAIN FOR FREE! 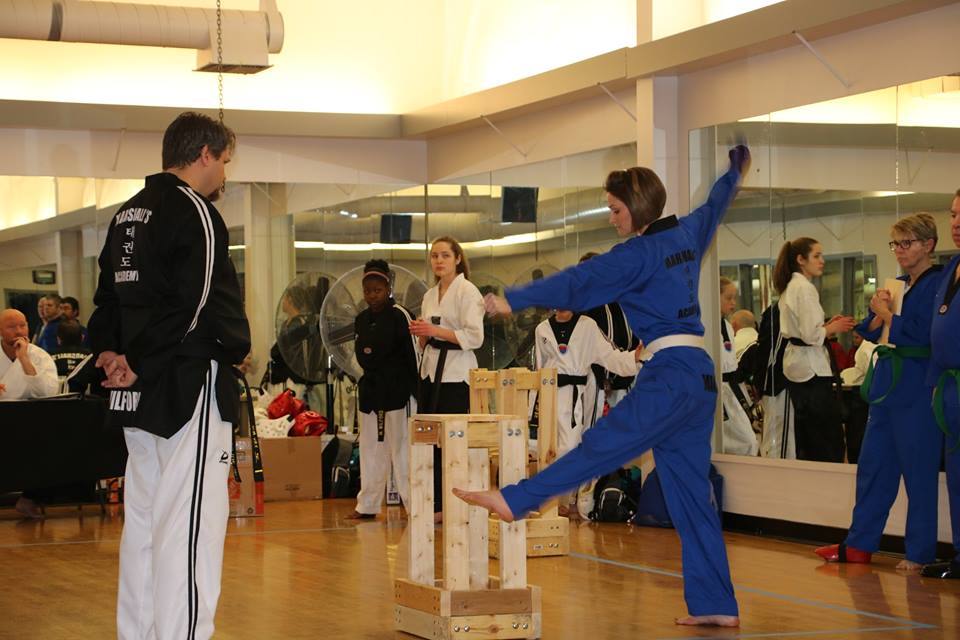 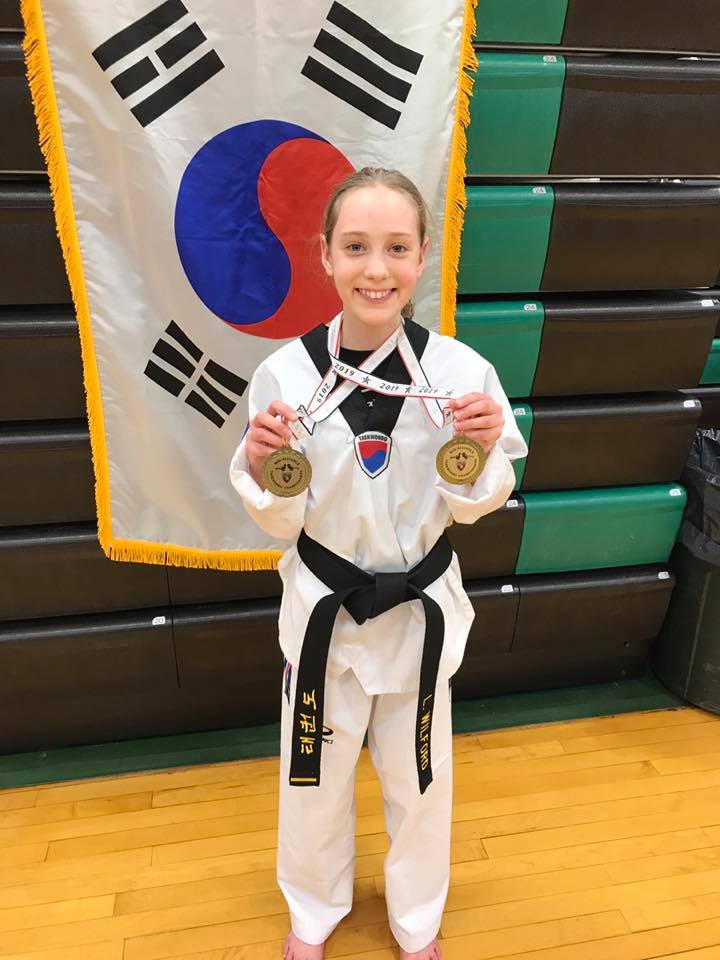 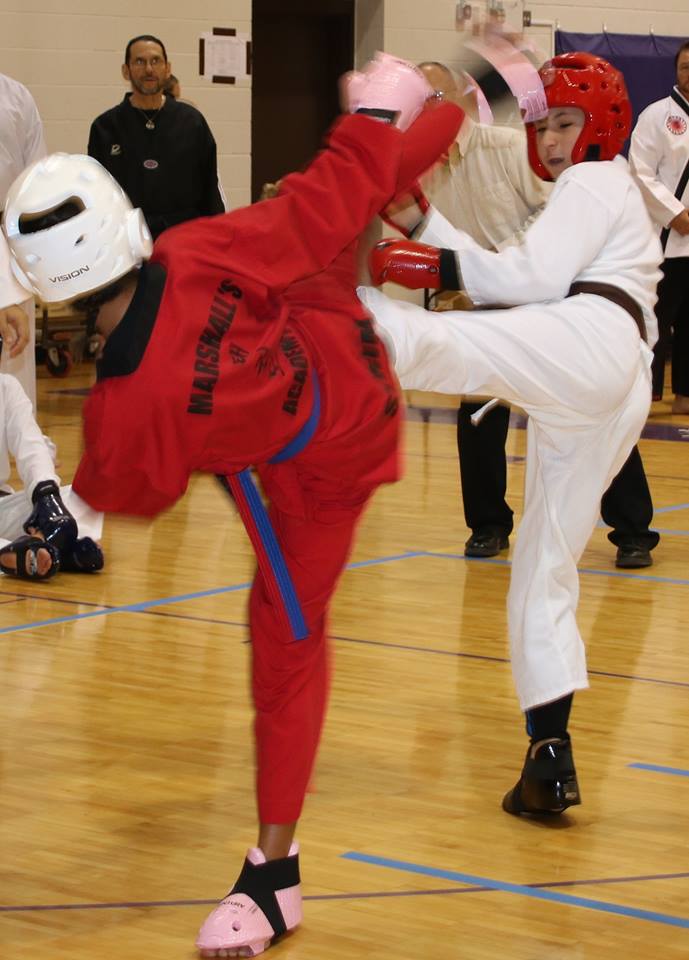 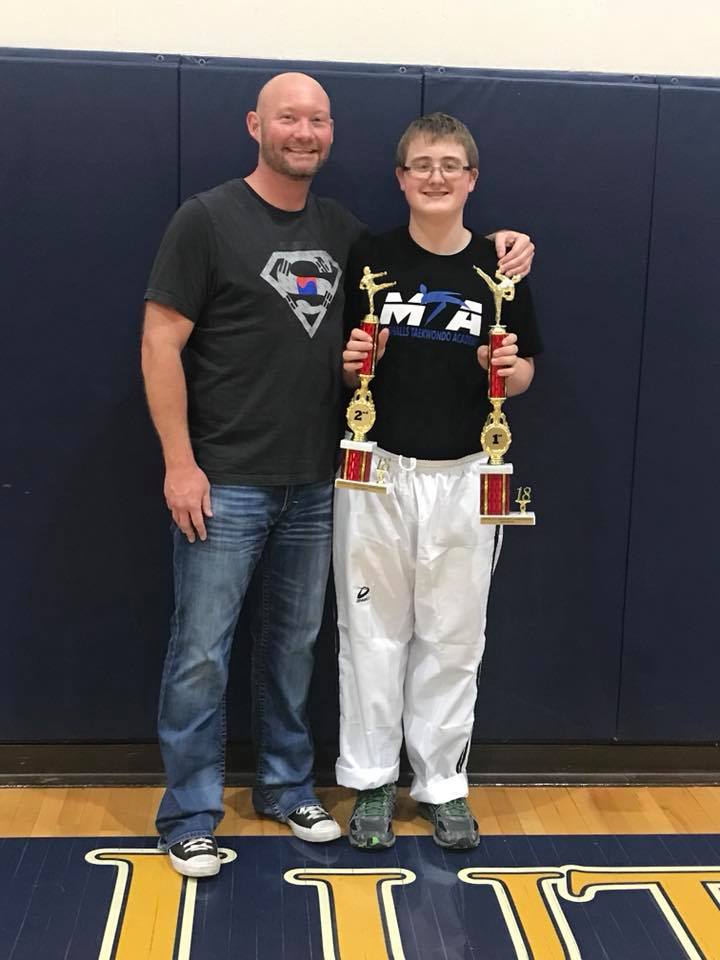 We operate out of the Four Seasons main campus in court 4 and 5.

We meet every night except for Fridays. We also have Saturday afternoon classes as well.

One Combat Academy is a truly Mixed Martial Arts club.

We have professional and amateur fighters in our club. We also have several families that train as well.

We offer something for everyone. We can assist you accomplish all your martial arts goals whether they are competition, survival, or fitness

Brazilian Jujitsu is a martial arts style that specializes in fighting on the ground. It is renowned for its submission techniques. The best part of BJJ is that it allows for a smaller person to defend themselves against a larger attacker by pinning their whole body against one of their attacker’s limbs.

Krav Maga is a self-defense system adopted by Israel Defense Forces. It specializes in real world attacks. Krav Maga continually evolves and changes to have the answers for all new attacks. Krav Maga only keeps the techniques that really work in real life. When you get your black belt in Krav Maga you will be able to defend yourself and family against the most violent types of attacks anywhere in the world.

Muay Thai Kickboxing is one of the most beautifully powerful and brutal striking styles on the planet. When you think of Muay Thai, think of power. There are no weak techniques in the system. It is the art of eight limbs. Learn how to strike with your knees, elbows, feet, and fists.

Wrestling is the single most important style to master to be effective in the cage. When you are a good wrestler you can take down your opponent at will and control them. From there you can submit them or pound them out. If you want to be a mixed martial artist, then you must learn wrestling.

Mixed Martial Arts (MMA) is a combat sport. It was made mainstream by the Ultimate Fighting Championship UFC. MMA is mainly comprised of Wrestling, Kickboxing, and Brazilian Jujitsu. MMA has become its own martial art style. It specializes in combining multiple martial art styles into one fluid system.

We have champion coaches ready to take you to the next level! 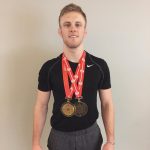 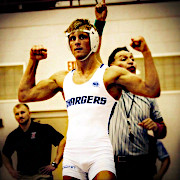 Jesse Perrin is a Black Belt under Third Degree Black Belt Jason Bircher of Kansas City Brazilian Jiu Jitsu (KCBJJ), part of the Renato Tavares Association. Jesse has over 15 years of BJJ experience and has competed over the years in a variety of tournaments, achieving bronze, silver, and gold medals in the NAGA (North American Grappling Association), the Hawaiian Triple Crown of Jiu-Jitsu, the Submission Challenge VGC, the Omaha Best of the Best, and the Sunflower State Games in Kansas.

Jesse is experienced in coaching Brazilian Jiu-Jitsu for both sport and self-defense and his curriculum will cover both aspects of the art.

His curriculum covers defense BJJ techniques and martial arts etiquette and safety. Students will go through a series of takedowns, guard, mount, side control, chokes, armlocks, back control, sweeps, escapes, and transitions related to Brazilian Jiu-Jitsu.